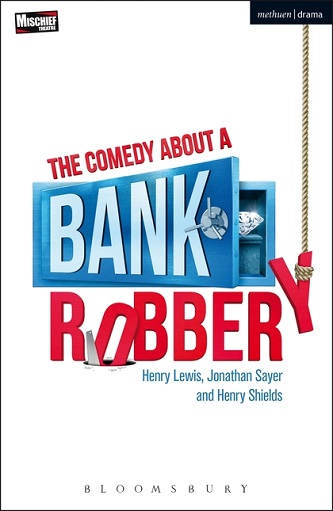 First there was The Play That Goes Wrong ...

And then The Nativity Goes Wrong

And now, from the aptly named Mischief Theatre, there's ...

And a snoozing security guard

What could possibly go right?

★★★★ "One long blast of laughter" ~ LondonTheatre.co.uk

★★★★ "It's a show that will have you on the edge of your seat: you'll be rocked by laughter, then held in suspense as they pull off another nail-biting effect" ~ The Stage

★★★★ " ... a lung-bustingly funny farce. This thrillingly inventive piece about bed-hopping gem thieves is a slapstick delight" ~ The Guardian

A genre pastiche, screwball comedy and classic farce that's as clean and clear as its brassy branding, it spins with a manic energy from Two Ronnies-esque wordplay through surreal set-pieces to slapstick stunts prepped to bring the house down

it features a host of hilarious but well-drawn characters who roar across the stage and tumble into disaster after disaster, each one more elegantly drawn than the last

The writers' ability to snatch a laugh out of every line, and to intricately prime each scenario with zinging punchlines and pay-offs is stunning, as call-backs and running gags pile up into teetering edifices of absurdity" ~ Time Out (London)