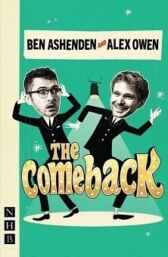 But when it’s revealed that a Hollywood director is in the audience, both acts glimpse a final chance for their big break

Cue sabotage, mistaken identity, and full-on farcical mayhem as the performance descends into a desperate battle for the limelight

With two male actors playing both comedy duos and the action alternating on and off stage, The Comeback presents a heart-warming exploration of bittersweet nostalgia and the enduring power of friendship

'Has plenty of charm … a high-energy meta-comedy' ~ The Times

'Surreal, silly and very, very funny ... will simply make you laugh your socks off’ ~ Evening Standard

'A neat conceit, played to the hilt of escalating, exhausting buffoonery … an uproarious, gag-a-minute triumph' ~ Telegraph

'Has everything you'd want in a comedy show… The Comeback is jam-packed with gags; from throwaway one-liners to clever call-backs which only get funnier and never lose speed or outstay their welcome. But what makes it so clever is how emotional moments are brought in and out throughout the show; you aren't just watching farcical situations, there are real moments of emotion too… an unmissable show full of heart and hysterical chaos that will leave you smiling for days' ~ Broadway World