The Collected Poems of Tennessee Williams 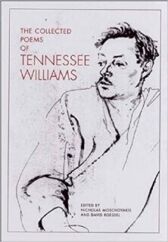 Few writers achieve success in more than one genre, and yet if Tennessee Williams had never written a single play he would still be known as a distinguished poet

The excitement, compassion, lyricism, and humor that epitomize his writing for the theater are all present in his poetry

It was as a young poet that Williams first came to the attention of New Directions’ founder James Laughlin, who initially presented some of Williams’ verse in the New Directions anthology Five Young American Poets 1944 (before he had any reputation as a playwright), and later published the individual volumes of Williams’s poetry, In the Winter of Cities (1956, revised in 1964) and Androgyne, Mon Amour (1977)

In this definitive edition, all of the playwright’s collected and uncollected published poems (along with substantial variants), including poems from the plays, have been assembled, accompanied by explanatory notes and an introduction by Tennessee Williams scholars David Roessel and Nicholas Moschovakis