The Cid & Cinna & The Theatrical Illusion 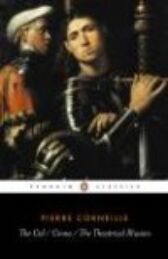 Corneille's vigorous and inventive genius dominated French theatre in the seventeenth century. The Cid, his masterpiece set in medieval Spain, is a heroic tragi-comedy charged with incident and youthful passion. It was the first great work of French classical drama, but although it played to packed houses (and still does at the Comédie Française), it drew such disapproval from the critics that the young Corneille, discouraged, wrote nothing for three years until Cinna, his tense political drama, appeared in 1640

The Theatrical Illusion, an earlier work included here, is a magical froth of a play, reminiscent of Shakespeare's comedies in its fantastic scenery, dizzy time changes and sheer, exuberant vitality. These blank-verse translations brilliantly catch the spirit of Corneille; and John Cairncross has also provided an introduction to the dramatist and a preface to each play