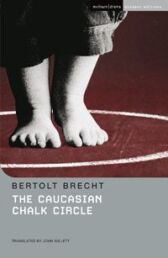 Large Mixed Cast
Written in exile during the Second World War, the story subverts an ancient Chinese tale - echoed in the Judgement of Solomon - in which two women claim the same child

The message of Brecht's parable is that resources should go to those who will make best use of them. Thanks to the rascally judge, Azdak, one of Brecht's most vivid creations, this story has a happy outcome - the child is entrusted to the peasant Grusha, who has loved and nurtured it

"One of the greatest poets and dramatists of our century" - Observer