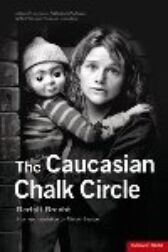 But when peace is finally restored, the boy's mother comes to claim him

Calling upon the ancient tradition of the Chalk Circle, a comical judge sets about resolving the dispute

But in a culture of corruption and deception, who wins?

Peopled with vivid and amusing characters, this is one of the greatest plays of the last century

"The Caucasian Chalk Circle, written in 1944 while Brecht was in exile from Germany, gives some epic illumination to socialist ideas about ownership and injustice. But more than that it's a story about love winning out over endemic corruption" ~ Dominic Maxwell