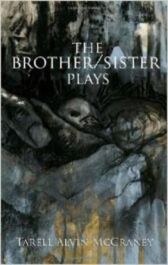 Lyrical and mythic, provocative and contemporary, McCraney's dramas of kinship, love, and heartache are set in the bayou of Louisiana and loosely draw on West African myths

In the Red and Brown Water charts the story of Oya, a fast and beautiful track star who must make difficult choices on her journey to womanhood

The Brothers Size dramatizes the struggle between brothers who have taken different paths: Ogun, single-mindedly running his auto shop, and Oshoosi, recently returned from prison and fallen back with trouble

Marcus; or the Secret of Sweet explores a young man's relationship with his history and friends as he discovers his sexuality and true self against the backdrop of an impending storm

"McCraney's richly drawn characters and colloquial poetry . . . manages to sound both epic and rooted in a specific place. Listen closely, and you might hear that thrilling sound that is one of the main reasons we go to the theater, that beautiful music of a new voice" ~ The New York Times

"Taut, expressive drama, The Brothers Size realizes the potential of theater to elevate the ordinary . . . McCraney's writing can be arresting" ~ Time Out New York