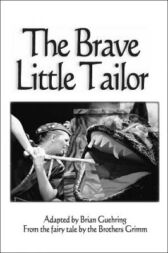 Brian Guehring from the Brothers Grimm

This meek village tailor is bullied by his boss, smothered by his mother, and harassed by his customers

He does, however, dream of fighting dragons

This achievement is half-heard and half-understood and soon the rumors spreading around the village get exaggerated until the King hears of a tailor who can kill seven Giants in one blow!

Now the tailor must find his own true courage

With the help of the Princess and the Jester he battles a rampaging unicorn, two troublesome giants, and a fierce dragon