The Boy Who Killed Pancho Villa 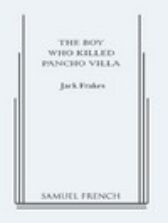 Loosely based on The Playboy of the Western World ...

It's rodeo time in Tombstone, 1912 - the girls admire local cowboys like Red Roberts, while feisty Peggy Fletcher longs for past romantic heroes

A rumor spreads that Pancho Villa, the notorious Mexican bandit, is in town

But Danny Jones, a shy young man, arrives to claim he killed Pancho Villa by hitting him over the head with his ukelele

Just as the townspeople accept Danny as a hero, Pancho Villa arrives with head bandaged and furiously looking for Danny

Helen Hunt, the town flirt gets rid of Pancho so Danny can take her to the barn dance

Meanwhile, citizens enter Danny in the donkey race, which he wins - becoming a more popular hero!

As Peggy and Helen bicker over Danny's affections, Pancho Villa returns to get even

Again Danny clobbers Pancho with his ukelele and the townspeople now think Pancho is really dead!

But since they saw "the killing" they prepare to lynch Danny

Again, Pancho returns to ask Danny to join his band in Mexico, and teach him to play the "guitarito"

Danny agrees and as they leave as "amigos", Peggy follows in pursuit of the boy who almost killed Pancho Villa!