The Boy King - The Legend of Tutankhamun - PERFORMANCE PACK 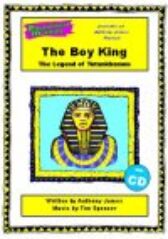 Large Mixed Cast
In the Valley of the Kings, archaeologist Howard Carter and his workers find the tomb of a long lost King in 1922

Carter then takes us on a 3,330 year journey into the past to meet a nine year old boy who became the Pharaoh of all Egypt

The Boy King Tutankhamun learns to be King alone until meeting his wife. Together they try to re-establish the ways of the Old Gods, but Tutankhamun is murdered at the wishes of a ghostly enemy from the past, at the age of 19

They teach the young boy to forgive his murderers and then show the King that his story will be remembered and his name will be known to nine year olds 3,000 years in the future

Trust Me I'm An Advisor

Royalty free for one year