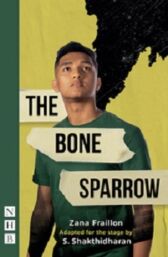 Subhi is a refugee

Born in an Australian permanent detention centre after his mother fled the violence of a distant homeland, life behind the fences is all he's ever known

Now his imagination is pushing at the limits of his world

One day, Jimmie appears on the other side of the fence, bringing a notebook written by the mother she lost

Unable to read it, she relies on Subhi to unravel her own family's mysterious and moving history

Together, Subhi and Jimmie must find a way to freedom, and they must be braver than they've ever been before ...

The Bone Sparrow, Zana Fraillon's powerful and deeply moving novel about the displacement and treatment of refugees and sanctuary seekers, has been widely read and studied around the world since its publication in 2017