The Blue Touch Paper - A Memoir 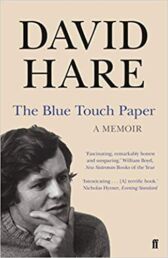 When, in 2000, the National Theatre published its poll of the hundred best plays of the 20th century, David Hare had written five of them

Now in his first panoramic work of memoir, ending as Margaret Thatcher comes to power in 1979, David Hare describes his childhood, his Anglo-Catholic education and his painful apprenticeship to the trade of dramatist

He sets the progress of his own life against the history of a time in which faith in hierarchy, deference, religion, the empire and finally politics all withered away

Only belief in private virtue remains

In his customarily dazzling prose and with great warmth and humour, David Hare explores how so radical a shift could have occurred, and how it is reflected in his own lifelong engagement with two disparate art forms - film and theatre

In The Blue Touch Paper David Hare describes a life of trial and error: both how he became a writer and the high price he and those around him paid for that decision