The Bloody Chamber - A Play 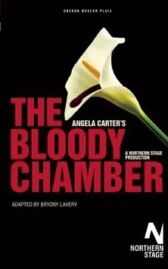 "All is yours, everywhere is open to you - except the lock that the single key fits. You must promise, if you love me, to leave it well alone"

This is Bryony Lavery's version of Angela Carter's reworking of the Bluebeard legend ...

She travels alone to his castle

A castle surrounded by sea except at low tide

On their wedding night the Marquis is called away, supposedly to travel to New York for an urgent meeting with his "man of business"

He leaves his keys in her possession, giving her free run of the entire castle

Except for one room which she must not enter

She does, of course, and her curiosity leads her to uncover a dark secret ...

She discovers the bodies of his previous wives

Covered with blood, they each speak to her

"Inviting us into a haunting tale of violence and sexuality, First Theatre Company's creatives used a wonderful synthesis of incredible acting, powerful lighting and sound effects, as well as a beautiful location to their full advantages, providing the audience with an extremely rich evening of theatre" ~ Mubasil Chaudhry

"Lavery is one of the best but consistently underrated playwrights in the country: her talent is lavish. She is a wonderful technician and is always surprising. It is never possible to second-guess her" ~ Observer