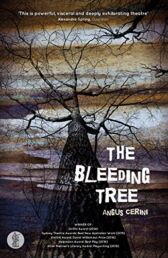 "Girls, I think your father's dead. I knocked his knees out. I conked his head. I shot that house clown in the neck"

In a dirt-dry town in rural Australia, a shot shatters the still night

The only issue now is disposing of the body

Triggered into thrilling motion by an act of revenge, The Bleeding Tree is rude, rhythmical and irreverently funny

Imagine a murder ballad blown up for the stage, set against a deceptively deadly Aussie backdrop

With three fierce females fighting back.