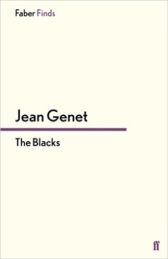 Large Mixed Cast
"One evening,an actor asked me to write a play for an all-black cast. But what exactly is a black? First of all, what's his colour?"

Using the framework of a play within a play, it exposes racial prejudice and stereotypes while exploring black identity

As a troupe of black actors re-enact the trial and ensuing murder of a white woman before a kangaroo court, the Queen and her entourage look on and comment

The Queen (a whited-up woman) comes to a Command Performance, but the proceedings are far removed from any Royal Variety Show

It is another striking example of the intensity, the depth and the complete originality that was Genet's view of life

"This play, written, I repeat, by a white man, is intended for a white audience, but if, which is unlikely, it is ever performed before a black audience, then a white person, male or female, should be invited every evening

The organizer of the show should welcome him formally, dress him in ceremonial costume and lead him to his seat, preferably in the first row of the orchestra

The actors will play for him

But what if no white person accepted?

And if the blacks refuse the masks, then let a dummy be used"

Jean Genet, from The Preface