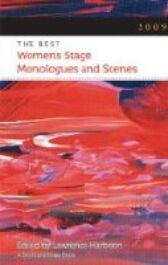 Most are for younger performers (teens through thirties), but there are also some excellent pieces for women in their forties and fifties, and even a few for older performers

But they all represent the best in contemporary playwriting