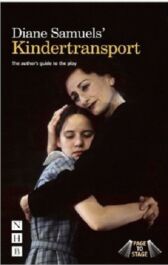 This author's Guide to Kindertransport is an invaluable and uniquely authoritative resource for anyone studying, teaching or performing the play

Since it was first staged by the Soho Theatre Company in London in 1993, it has enjoyed huge success around the world, has been revived numerous times, and is widely studied in schools and colleges

The play tells the story of how nine-year-old Eva, a German Jewish girl, is sent by her parents on the Kindertransport to start a new life with a foster family in Britain just before the outbreak of World War Two

Over forty years later, she has changed her name to Evelyn and denied her roots

When her own daughter discovers some old letters and photos in the attic, she is forced to confront the truth about who she really is

In this Guide to the play, Diane Samuels investigates the historical background, drawing on the personal testimony of those whose lives were transformed by the Kindertransport

And she presents detailed accounts from the actors, directors, a composer and designer who have contributed to the play's most notable productions

" ... illuminating ... It's a refreshing change for a study guide to come from the pen of the person who created the text being studied ... an informative, enlightening contribution to textual study and performance" ~ The Stage

THIS IS A STUDY GUIDE