The Father and the Assassin 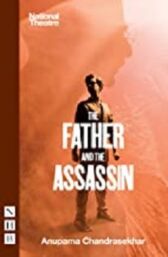 Nathuram Godse: journalist, nationalist – and the man who murdered him.

Anupama Chandrasekhar's play The Father and the Assassin traces Godse's life over thirty years during India's fight for independence: from a devout follower of Gandhi, through to his radicalisation and their tragic final encounter in Delhi in 1948

An essential exploration of oppression and extremism, this gripping play - the first by an Asian female writer at the National Theatre - had its world premiere on its biggest stage, the Olivier