The Art of the Artistic Director 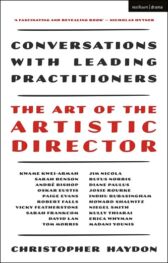 He speaks to twenty of the most prominent and successful artistic directors in the US and UK, uncovering the essential skills and abilities that go into making an accomplished artistic director

Subtitled Conversations with Leading Practitioners, The Art of the Artistic Director asks how do you decide what stories an audience should hear?

How do you make your theatre stand out in a crowded and intensely competitive marketplace?

And how do you make your building a home for artistic risk and innovation, while ensuring the books are balanced?

It is the artistic director's job to answer all these questions, and many more

Yet, despite the central role that these people play in the modern theatre industry, very little has been written about what they do or how they do it

Foreword by Michael Grandage, former artistic director of the Sheffield Crucible and the Donmar Warehouse in London

The 20 leading practitioners are ...

"The list of contributors is very impressive ... by reading all 20 interviews, [readers] will discover much about what makes these people tick and the ways in which they work ... An ideal book for anyone wondering about whether they or perhaps friends and family might pursue a career of this type. In addition, general readers will lap up anecdotes from the working lives of those who have given them so much pleasure of the years" ~ British Theatre Guide

"To run a theatre you need to be part bureaucrat, diplomat, politician, manager, impresario, counsellor and dramaturg. Oh, and being an artist doesn't hurt. This excellent book reveals just how difficult it is to fill these varied and many roles" ~ Richard Eyre (artistic director of the National Theatre, 1987-1997)

"A fascinating and revealing book. I learned a great deal from it, about the very different ways my colleagues approach their jobs, and about how the theatre is changing to reflect a changing world" ~ Nicholas Hytner (artistic director of the National Theatre, 2003-2015)

"These twenty simple tales of learned, pragmatic leadership constitute a valuable guide to running theatres and a quietly powerful argument that no man or woman or art form is an island" ~ Michael Boyd (artistic director of the Royal Shakespeare Company, 2002-2012)

"An excellent snapshot of what a range of ADs think. Haydon is empathetic, gently probing and manages to get some indiscrete admissions among all the usual arts speak and PR chat" ~ Aleks Sierz blog