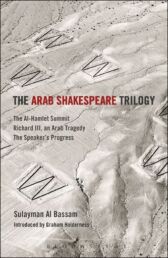 These versions of Hamlet, Richard III and Twelfth Night are collectively known as The Arab Shakespeare Trilogy...

Richard III - an Arab Tragedy is a contemporary adaptation of Shakespeare's classic, reworked and transplanted into the scorching oil-rich Islamic world of the Gulf

The Speaker's Progress is a forensic reconstruction of Twelfth Night which transforms into an unequivocal act of defiance towards the state, forming a dark satire on the decades of hopelessness and political inertia that fed twenty-first-century revolts across the Arab region