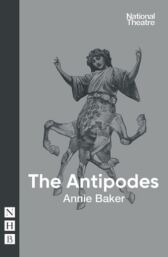 "The most original and significant American dramatist since August Wilson" ~ Mark Lawson, The Guardian

A group of people sit around a table theorising, categorising and telling stories

Their real purpose is never quite clear

But they continue on

Searching for the monstrous

Part satire, part sacred rite, The Antipodes asks what value stories have for a world in crisis

First seen at Signature Theatre, New York, in 2017, the play had its UK premiere at the National Theatre, London, in 2019

'There is simply no playwright like Annie Baker ... hyper real, surreally odd and extremely funny' ~ Metro

'Another cryptic masterpiece from Annie Baker ... utterly, gloriously out there and will doubtless horrify some people ... endlessly shifting and complex' ~ Time Out

'An examination of fiction and reality that refuses to give up its own mysteries ... so sharp, and so pertinent, venturing to worlds where most playwrights fear to tread. Hours after the performance had ended, I found I was still thinking of the play and its themes, pulling at threads, thrilled by its rich ambition. Annie Baker. What a writer' ~ WhatsOnStage

'Complex and many-layered, and in the course of the play she has characters tell some cracking stories in fantastic ways ... excruciating and masterful at the same time, this is a huge allusion of a play always skirting, never defining and all the more potent, and relevant, for it' ~ The Stage

'Monstrously clever: a philosophical Fright Night... addresses [its] ideas with such witty, idiosyncratic strangeness, and such innate theatricality ... spry, surprising, very funny, and likely to haunt the subconscious' ~ Broadway World

'Endlessly fascinating The Antipodes leaves you glowing with a wondering satisfaction. I mean the happy satiety that comes from being in the hands of a real right-brain/left-brain author who channels her ineffable instincts with a master artisan's practical skills Ms. Baker has established herself as one of the freshest voices in American theater. Here she also provides evidence of her peerless ear for contemporary language' ~ New York Times

'Tantalizing In John, a play set in a quaintly eerie bed and breakfast, Baker flirted with occult suspense. Here, in a drama confined to a fluorescent room she edges into symbolist territory. Baker's signature hyper-realism makes room for an irrational dimension that lightly evokes the supernatural enigmas of Maurice Maeterlinck and August Strindberg' ~ Los Angeles Times