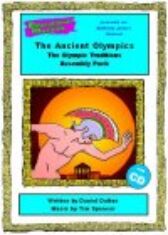 Only men were allowed to compete in the Ancient Olympics in Greece. Girls and unmarried women could attend, but not married women. However one married woman, Callipateira, wanted to go to the Olympic Games so she could help her son to become an Olympic champion. She put on a false beard and went to the games

This is the story of Callipateira and her adventures at the Ancient Olympics. On the way we discover the traditions of the games, such as the Olympic Torch and the Olympic Truce

The Ancient Olympics is a fictional story based around Pausanias' original story of Callipateira, in his book "Pausanias: Description of Greece" written around 150 AD and translated by W. H. Jones of Harvard University in 1918, which gives the explanation of the origins of both the Olympic Torch and the Olympic Truce