The Adventure of the Clouded Crystal 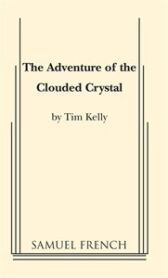 Doyle arranges a seance with a famed medium

Houdini plans to expose the medium as a fraud, but he doesn't count on the woman's cleverness

Ultimately, Doyle and Houdini have a stormy scene and the magician finds he must retreat before the medium's skill and intelligence

They make a strange pact: to stay as far away from one another as possible

If Houdini behaves, she won't reveal his secret - he believes Sherlock Holmes is a real person