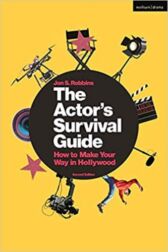 Subtitled How to Make Your Way in Hollywood, The Actor's Survival Guide is a handbook and essential guide to the business of living and working as an actor in the Los Angeles area

Exploring the experience of relocating to L.A, the casting process and how to identify and find work with the key players in the film and television industry, this book offers a business-centered road map through the industry

In doing so, the book seeks to provide an extra-competitive edge of experience and know-how for those actors who have the skills and determination to persevere

This Second Edition features a number of new sections and topics including:

Updates on casting diversity with the most recent SAG/AFTRA data

Details on new contracts for film, television and new media; ongoing contract negotiations for video game content; and the ramifications of the SAG/AFTRA merger

Emerging role of social media in an actor's marketing strategy

Written from the perspective of working actor and experienced career-guidance teacher Jon S. Robbins, this unique guide will help aspiring actors bridge the gap between training in drama schools and working in the epicentre of the film and television industries

Hugely comprehensive, The Actor's Survival Guide offers everything you need to know:

1. Moving to Los Angeles "Simple Is as Simple Does"

The Neighborhoods
Hollywood or the Beach?
NoHo or Burbank?
West Hollywood or Silverlake?
Employment vs Entrepreneurship

4. The Business of Acting

Headshot - Theatrical vs. Commercial
Photographers How to prepare for the photo shoot
Resume - What to include/What not to include
Photo Cards
Actor's Reel
Personal Website/ Podcasts
IMDb

What is the difference
Theatrical/Commercial
SAG Franchised?

Who are they?
SAG
EQUITY
How do I join a union?
What will it do for me?