The Acting Bible - The Complete Resource for Aspiring Actors 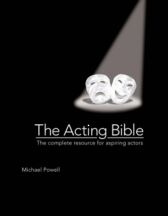 Professional acting is both an art and a business, and this book advises beginning actors on how to cope successfully on both fronts

Expressing the character's thoughts and ideas through body posture and movement

Learning the business side of acting by selling one's talents effectively

The author strips away preconceptions and clichés often associated with acting, and pinpoints common mistakes that inexperienced actors need to overcome and avoid