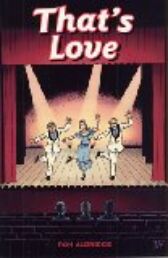 Are there really such things as "soul-mates"?

Are certain people destined to be together?

Frank, his beautiful wife Sarah and comic Tony are the perfect recipe for an evening's entertainment ...

... and for an entangled emotional love triangle!

Sarah - who married Frank despite being in love with Tony - has spent much of her life ruing her choices and in a series of flashbacks to the "good old days", we see them as their younger selves performing the song and dance routines punctuating the emotional rivalries of the trio

Over the course of visits to Tony this entertaining - and sometimes very moving - play sees Sarah finally reaching the decision she should have taken years ago ...

"Alridge's play is something of a minor masterpiece" ~ The Stage