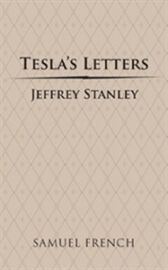 The two-act, 4-character drama set in 1997 in the Balkans is about an American who sets out to find Nikola Tesla's doomsday device only to discover that a machine is not required. Electrical pioneer Tesla, a Croatian-born Serb, was Thomas Edison's biggest rival

Daisy Archer, a bright-eyed PhD candidate, arrives in Belgrade thinking she has permission to view letters at the Nikola Tesla Museum

She is not prepared to face the museum's director Dragan, a Serb with family in Croatia, who has needs of his own and who strikes a dangerous bargain with Daisy

If she agrees to visit a war-torn part of Croatia to determine whether Tesla's birthplace has been destroyed, she will be given access to Tesla's letters

Daisy learns that the bargain is more complicated than it appears, and that she is a pawn in a larger game

"Is there a more timely play in New York? This well-written, well-constructed drama constitutes pertinent, intelligent, instructive...and often witty and suspenseful theatre. Although the play is a drama of ideas about war and peace, the exercise of humanity and the uses of science, it is a measure of its appeal as theater that its first act ends not with a whimper but a bang" ~ Lawrence Van Gelder, The New York Times

"It is a captivating mystery up until the very end. The intricate writing is filled with intellectual arguments and verbal word-play about historical events, not unlike a Tom Stoppard play" ~ Jennifer MacBain, Show Business Weekly