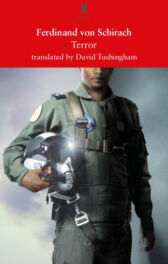 Guilty or Not Guilty?

Enter the courtroom, hear the evidence, make your judgement.

A hijacked plane is heading towards a packed football stadium

But probably saving thousands of the 70,000 lives in the football stadium

He is charged with murder

Put on trial and charged with murder, the fate of the pilot is placed in the hands of the audience who must decide "Guilty or Not Guilty?"