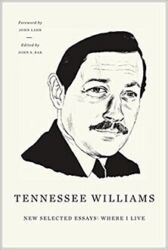 In "Five Fiery Ladies" Williams describes his fascinated, deep appreciation of Vivien Leigh, Geraldine Page, Anna Magnani, Katharine Hepburn, and Elizabeth Taylor, all of whom created roles in stage or film versions of his plays

There are two tributes to his great friend Carson McCullers, reviews of Cocteau's film Orpheus and of two novels by Paul Bowles

Also, a political statement from 1972, "We Are Dissenters Now" and some hilarious stories in response to Elia Kazan's frequent admonition, "Tennessee, Never Talk to An Actress"

And also Williams' most moving and astute autobiographical essay, "The Man in the Overstuffed Chair"