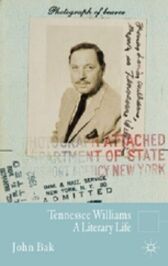 As restless as many of his celebrated characters, Tennessee Williams drifted between cities as frequently as he did lovers

But in the end there were those few permanent fixtures that helped anchor his life, be they the cities of Key West or Rome or the love and friendship of Frank Merlo, Paul Bowles, Jane Smith, and Marion Vaccaro

Wherever he travelled throughout the world, and whomever he may have taken with him on his journey, Williams was never far from a swimming pool, a cool drink, or a manual typewriter

From his college years through his Broadway triumphs to his final battles with the theatre critics, Williams never stopped writing, leaving behind him mountains of letters, manuscripts, and daily musings

Tennessee Williams: A Literary Life draws extensively from the playwright's correspondences, notebooks, and archival papers to offer an original angle to the discussion of Williams's life and work, and the times and circumstances that helped produce it.