Ten Plagues & The Coronation of Poppea 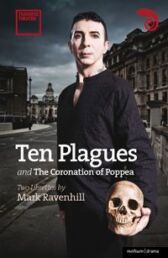 London is infected and the dead fall in the streets

As the plague pits fill, the people of London struggle to maintain a society in the face of overwhelming mortality

Based on eye-witness accounts from 1665 and drawing poetic parallels with modern epidemics, Ten Plagues relates one man's journey through a city in crisis

Told entirely through a series of songs, Ten Plagues explores humanity's struggle with sickness and death and celebrates our capacity for survival

This volume also contains The Coronation of Poppea, a new version of Monteverdi's opera depicting the triumphant adultery between Poppea and Roman Emperor Nero

Tackling this tale of epic lives, Ravenhill updates Tacitus' scathing portrayal of decadence and imperial degeneracy with language which is contemporary, spare and brutally powerful

Mark Ravenhill's introduction to the two pieces explains the genesis of his writing, the history behind the operas, their themes and their poetry