Technical Standards for Places of Entertainment 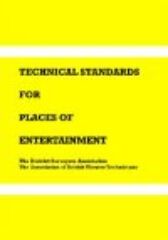 This details the necessary physical standards required for entertainment venues

Local licensing authorities impose technical requirements to ensure the safety of the public, staff and performers in places of entertainment such as theatres, cinemas, discotheques, night-clubs and concert halls, and an overhaul of these requirements has been long overdue

Technical Standards is the result

The Model Technical Regulations are part of the new Model National Standard Conditions for the licensing of entertainment premises. The Standards deal with the physical requirements for building (or converting), equipping and maintaining any entertainment premises through a series of related discussions on subjects such as Site, Means of Escape, Building Services, Stage Engineering, Fire and Emergency Systems, Communications and Signs

Each Model Technical Regulation is accompanied by Recommendations, which suggest ways that its functional requirement may be met

Advice is offered on safe standards and good practice for all types of entertainment premises. The problems of smaller premises and conversions of existing premises for use for entertainment are fully considered

The Standards are also concerned with the safety and well-being of all users of entertainment premises. The Working Party remains in existence as a Standing Committee. Within the book there is an e-mail address whereby those using the document can advise the Committee of difficulties of interpretation, new products and ideas