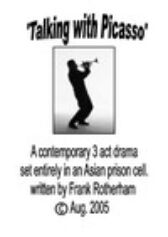 Willis, an Australian trumpeter, years in solitary confinement in an Asian prison, faces a death sentence on a false drug smuggling charge.

Agreeing to a way out, he plans revenge

Picasso, a graffiti drawing on the cell wall is his only confidant, until ambassador Armstrong engages an Australian lawyer who endeavors to save his life

The guard captain, and Hinze, a gofer for the crime boss, work against Willis, and when his sister arrives to visit him, issues quickly move to a dramatic conclusion