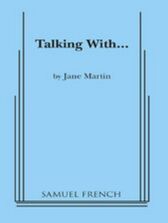 Idiosyncratic characters amuse, move and frighten, always speaking from the depths of their souls

They include a baton twirler, a fundamentalist snake handler, an ex rodeo rider and an actress willing to go to any length to get a job

"A dramatist with an original voice ... [and] gladsome humor" ~ N.Y. Times

"With Jane Martin, the monologue has taken on a new poetic form, intensive in its method and revelatory in its impact" ~ Philadelphia Inquirer