Sugar Dollies & After the Rain 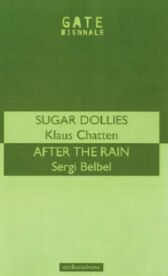 TWO PLAYS - One from Germany, one from Russia ...

After the Rain - in this surreal and bitter-sweet comedy, there's been no rain for two years and smoking is banned ...

On the roof of a corporate building in an unnamed city, employers, employees and secretaries meet for an illicit cigarette