Strangers in Between & Holding the Man 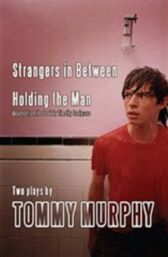 Confused and naïve, he meets two strangers: the ultra-urban Will, who offers brotherhood, sex and something unexpected; and Peter, a fifty-year-old gay man whose mother is dying in a nursing home

But how can he move on when he can't even use laundry powder?

Tommy Murphy's stage adaptation faithfully captures the book's heart-wrenchingly honest portrayal of a fifteen-year relationship, but also succeeds in transforming it into a unique theatrical experience that is wholly his own