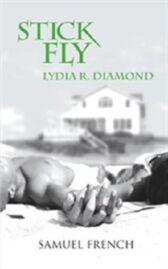 The affluent, African-American LeVay family is gathering at their Martha's Vineyard home for the weekend, and brothers Kent and Flip have each brought their respective ladies home to meet the parents for the first time

Kent's fiancée Taylor, an academic whose absent father was a prominent author, struggles to fit into the LeVay's upper-crust lifestyle

Kimber, on the other hand, is a WASP who works with inner-city school children, fits in more easily with the family

Joining these two couples are the demanding LeVay patriarch Joe and Cheryl, the daughter of the family's long-time housekeeper

As the two newcomers butt heads over issues of race and privilege, long-standing family tensions bubble to the surface

And then reach boiling point

KENT (SPOON) - 31, youngest son of the LeVay family; has grown up with an artistic disposition in a family of doctors and lawyers

CHERYL - 18, the daughter of the family maid; pretty, bright, always well-intentioned; has always had a crush on Flip

FLIP - 36, oldest son of LeVay family; the "golden boy" who, with some compromises, has fallen in line with his father's expectations; an incorrigible ladies man

JOE LEVAY (DAD) - 58, LeVay patriarch; a well-intentioned man, who rules his family with a firm, loving hand; has always had a way with women

KIMBER - 32, white; is an intelligent woman with a quick wit and sincere warmth; her social status matches that of the LeVays, with of course, the undeniable privilege of whiteness - of this she is aware, and on some level appalled

"One of my favorite plays of the year." - Bloomberg "Conflict and sexual sparks. A juicy family drama" ~ The New York Times

"She's a polished playwright, creating a cast-full of dynamic characters all sitting uncomfortably on a powder-keg situation" ~ Boston Globe

"There's no question that Diamond is a major talent" ~ Chicago Tribune

"We rarely have the opportunity to see truly diverse work on Black American families ... few theaters allow for the incredible complications that exist in the Black family dynamic. Audiences, therefore, are given a simplistic view on a challenging topic. Lydia R. Diamond's STICK FLY tackles this issue directly

Upon first introduction, it is clear that Kimber and Taylor are destined to destroy each other, but what happens is nothing short of a surprise

This well made, incredibly funny play allows the audience a bug-eyed perspective into a distant world, that of the affluent Black family" ~ Travis Ballenger

Stick Fly opened on Broadway at the Cort Theatre in New York City on December 8, 2011