Stanislavski - His Life and Art 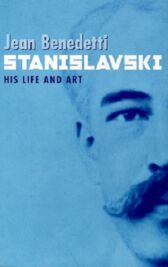 Jean Benedetti's critical biography of Konstantin Stanislavski, one of the towering figures of twentieth-century theatre, has been fully revised and expanded offering new facts and insights into Stanislavski's life and arts

"Benedetti's biography rescues Stanislavski from his stereotypes and will reinstate him for this and coming theatrical generations. It's written with the clarity of shape, firmness of purpose and fullness of emotion that mark out a good piece of acting" - Guardian

"Both extremely informative and highly readable, this biography will become the one indispensable book in English for anyone beginning to study not just Stanislavski and the Moscow Art Theatre, but also the foundations of modern acting and directing" ~ Theatre Research International