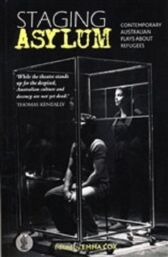 The first of its kind, this timely anthology brings together six contemporary Australian plays that offer a range of narratives and perspectives on asylum seekers

A vexed issue within the Australian community-particularly among politicians, who often use asylum seekers to further their own ends-this collection contributes to Australia's ongoing discourse on unauthorised asylum seekers, immigration detention, border control and the right to belong

This eclectic collection includesCMI (A Certain Maritime Incident) by version 1.0, a smart, ironic verbatim work that deals with the Children Overboard Affair and the SIEV X disaster

The Rainbow Dark by Victoria Carless, a surreal domestic satire about immigration detention

The Pacific Solution by Ben Eltham, which takes armchair cricket commentary as a point of departure for a farce about the Howard government's excision of migration territory

Halal-el-Mashakel by Linda Jaivin, which looks at the friendship between two detained asylum seekers

Journey of Asylum Waiting devised by Catherine Simmonds, a series of vignettes based upon the personal experiences of asylum seekers and refugees living in Melbourne

Nothing But Nothing by Towfiq Al-Qady, an autobiographical play about childhood and war

With a main Introduction as well as separate introductions to each play by Editor and Drama Lecturer Dr Emma Cox, Staging Asylum recognises the crucial role that theatre has played-and continues to play-in one of Australia's most hotly debated and urgent contemporary issues