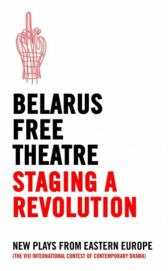 This meant that Belarusian playwrights, isolated in their own country because of state censorship and banned from performing, were recognized internationally and had the opportunity to show their work free from state oppression

This publication is dedicated to promoting the works of the winning playwrights and includes the following six plays ...

The Women and the Sniper ~ Tatiana Kitsenko