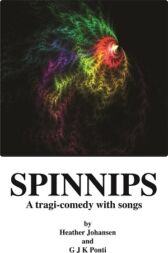 Unable to bear opening her eyes to the truth, Princess conveys none of it, turning to fabrication instead: a constant yarn

She tricks herself through a scenario of backdrops endeavouring to hide her real self, her pain and her rage

Spinnips mixes the comedy of such madness with the sorrow and pain that causes it as she hears her mother’s truth, but flees from it, lurching like a spinning top into the hands of the auctioneer, the only one seeing the truth of the situations she provokes

Large Mixed Cast or can be performed by M3+,F2+