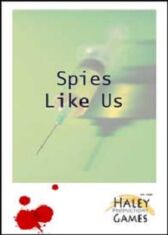 It's Phase 2 testing stage for "the latest breakthrough in flu eradication" namely Tetraclyclonine, a drug that Dr. Mars claims will eliminate the flu virus from the human race

Or so he says

Truth be told, nothing is at it seems

The place: The laboratory compound and research center of Dr. E.T. Mars, a renowned scientist and an expert in the field of alien research.

SIX PRIMARY SUSPECTS (these are the folks who will have full knowledge of the mystery; you'll give them a complete script):

Dr. Ernest Terrence Mars (but you can call him E.T.): A renowned scientist and an expert in the field of alien research. His flu eradication drug, Tetracyclonine, will be the talk of the medical world after he completes Phase 2 of the testing. The question you, as a volunteer test subject, may be asking is, "do aliens have anything to do with this and should I get out now while I still can?"

Ana Graham: E.T.'s sexy new assistant. She sure doesn't look like a lab assistant but who are we to judge. E.T. seems quite taken by her.

Wanda Frohicky: She's the President of The Roswell Raiders, a group made up of folks who've been abducted and/or probed by aliens one or more times. She knows E.T. Mars is up to no good and desperately wants to shut him down. Wanda and Harry Truman were once engaged until he broke up with her a few weeks ago.

Harry Truman: E.T.'s security guard. He's also a former member of The Roswell Raiders, having been probed by aliens at least once. A real geek with big ideas and big plans (read: fantasies) who loves action movies and romance novels.

Rocco Rosetti: A test subject. He doesn't appear to be the brightest bulb in the chandelier but then again how smart does one have to be to volunteer themselves as a test subject for an experimental drug?

Lila Jones: The new cleaning woman for the compound. We figured we'd mention her - just in case.

SECONDARY SUSPECTS (Optional - Remember, everyone will be actively involved in this mystery because it will be their job to solve the case and because you'll be encouraging them to come in costume and in character. Use any and all of these secondary suspects if you have "extra" cast members you want to use. You will NOT give them a script but you will give them a description of their character and let them run with it):

"Ringo" Langley (male or female): Works with Harry Truman in security. Think of Harry and Ringo as the Abbott and Costello or Dumb and Dumber of security.

Joey Pants (male or female): The Vice President of The Roswell Raiders who is just as fanatical as Wanda is. Wanda is Joey's mentor so Joey enthusiastically agrees with everything Wanda says.

Melvin and Mervin Myers (female alternatives: Melvina and Mervina): Twin test subjects who've undergone too many tests. Think of them as E.T.'s "Renfields" (remember Renfield from the Dracula lore?)- devoted yet not all there assistants or go-fers who are inseparable. Their sole purpose is to please E.T.

Jerry Rivera: An undercover reporter for the National Enquirer who has volunteered himself as a test subject. His experiences will be chronicled in a series of articles for them. Jerry is as self-centered as they come. His ego drives everyone nuts in short order. He also has a tendency to narrate the goings-on into a small cassette recorder which also drives everyone nuts. If anyone asks if he's a reporter he'll loudly deny then take them into his confidence and boastfully admit that he is but he's undercover