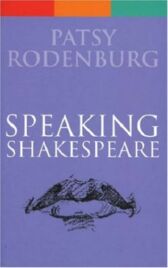 This essential new book from Britain's leading voice coach goes to the heart of acting Shakespeare.

Starting with the basics of verse-speaking through to the rehearsal of leading roles from Hamlet, King Lear, Richard III, Macbeth and others, Patsy Rodenburg unlocks some of the greatest challenges any actor will ever encounter

The second part examines clues to meaning and acting provided in aspects of the text such as rhythm, rhyme and the differences between blank verse and prose

The third section offers a series of exercises to help the actor establish an imaginative connection with the plays, and a uniquely detailed final section discusses a series of speeches from the whole range of Shakespeare's work

"Patsy Rodenberg is one of the handful of people in the world who understand that the use of the voice by actors and public speakers engages the heart, the mind and the body. There is no teacher in my experience, who brings all these together with such wisdom and patience" ~ Richard Eyre, National Theatre

"It's blown my world wide open. This is an astonishing book--which even if it apparently looks like a workbook for actors, is more importantly a guide for anyone who'd like to know what planet she's landed on. Because you can't know much about planet earth if you don't know much about Shakespeare--and the secrets Shakespeare is willing to share with you aren't available unless you can hear his lines, and you can't hear them if you can't speak them. Understand, I've been reading Shakespeare for 40 years. this book has doubled the pleasure and depth of the experience for me ~ Harry Kelley