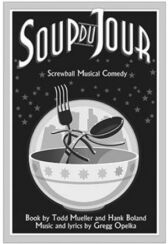 There's a mystery at Bailey's restaurant, one of Gotham's top dining establishments, and it's up to Katharine Hawks, the New York Herald-Tribune's Pulitzer Prize-winning ace reporter, to solve it!

J. P. Thompson, editor of the struggling Herald-Tribune is desperately searching for a way to increase circulation

Across town, Stewart Bailey is simultaneously mourning the death of his father and preparing for his imminent wedding to socialite golddigger Tiffany Vandervanden

Stewart has just inherited his father's restaurant, the success of which was built on its famous Soup du Jour

There's only one catch - Stewart's father took the recipe with him to the grave, and Stewart - along with everyone else in the story - winds up searching wildly for the missing recipe

Enter Katharine Hawks who attempts to save the day

Sent undercover as a waitress to find the recipe, Katharine winds up losing her heart to Stewart Bailey

Once she learns Stewart has lost the recipe, Katharine is in a real dilemma - career or love?

Winning songs, lightning-fast dialogue in the Tracy-Hepburn tradition, and a great plot are the delicious ingredients of this delightful tribute to 1930s screwball comedies

"A madcap and charming homage to the past. Think pheasant under glass. Think cherries jubilee" ~ Chicago Pioneer Press

"Soup du Jour is the recipe for old fashion gaity! It's all about laughing, about toe-tapping tunes and witty lyrics" ~ Chicago Critic

"Soup du Jour is as close to perfection as musical comedy gets! The recipe for successful musical comedy has been followed beautifully: take equal parts talent and chutzpah, mix in a workable plot, lovable characters and memorable songs and sprinkle with that certain magical ingredient that makes audiences thrill to be in the theatre" ~ Steadstyle Chicago