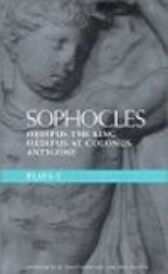 These three plays are collectively known as the Theban plays. Starting with Oedipus the King and ending with the ultimate sacrifice of Antigone, his daughter the plays follow the trials of a family cursed by the edict of an oracle that "you will kill your father and marry with your mother"

From the fourth century BC - when Aristotle took Oedipus the King as his model tragedy, the influence of Sophocles' great plays has been assured