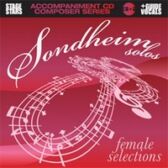 Since then, his work as composer/lyricist has earned him nine Tony Awards (including the Special Tony Award for Lifetime Achievement in the Theatre), multiple Grammy Awards, an Academy Award and a Pulitzer Prize

Each of the 10 songs appears on the album twice ...

On the Steps of the Palace

The Ladies Who Lunch

The Worst Pies in London

Send in the Clowns