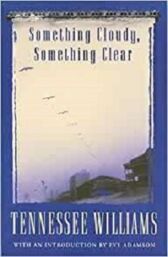 Never before published outside America, Something Cloudy, Something Clear is, by Tennessee Williams' own admission "one of the most personal plays I've ever written"

Set in Provincetown, Cape Cod, in 1940, the play records Williams' experiences during that "pivotal summer when I took sort of a crash course in growing up"

Eve Adamson, the original director of the play said of it - "Two times, two selves, two sensibilities exist simultaneously in August [the central character]. But also, hovering around and permeating the entire dramatic poem, is the double exposure of Tennessee Williams: the artist and his art, the man and his theatrical persona...time stopped and time flowing"

Used copy in good condiition with some annotation