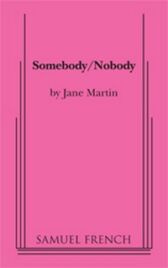 So you think you want to be famous?

So did teen idol and "shark-movie" star Sheena Keener, the darling of the press, the obsession of the paparazzi, and the Goddess of the 'E! Channel'

When Sheena ends up on the doorstep of naïve newcomer Loli, a recent arrival from Flatt, Kansas, it's a wild ride on the road to fame

Sheena is a somebody who wants to be a nobody

And Loli is a nobody desperate to be a somebody

In this hilarious comedy about Hollywood, fame and the TMZ, renowned playwright Jane Martin takes dead aim at our culture of celebrity

"The comedy is off-beat and beyond way out there, with an energy level that's full-bore, redline action. Neil Simon this is definitely not ... you might as well just give in and start laughing at the beginning, because for sure you'll be laughing by the end" ~ The Tuscon Citizen

The script is wicked funny... Laughing your ass off is a fine way to spend an evening" ~ Phoenix New Times