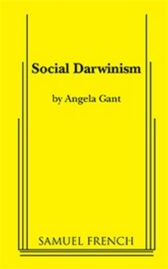 "To anyone who has ever gotten a beat down for looking like a woman, being a woman, looking like a queer, being a queer, not being manly enough, being too manly, or having the audacity to be any race other than Caucasian, here's the last laugh!"

Social Darwinism is a socio-political absurdist comedy that follows a familial group: an Alpha Male, Alpha Female, Second Banana (Subordinate Male), Subordinate Female, Adolescent Male, Adolescent Female, Outside Male, and Outside Female as they move through several different social classes as viewed by a Field Scientist and his Assistant:

The play looks at racism, homosexuality, and the subjugation of women, which changes as the play evolves

"Brilliant Social Darwinism inspires many laughs while making points ... Gant finds new comedic ways to bare a number of societal sins ... makes her statements in consistently entertaining fashion, and ... forms a real-life evolutionary chart on stage that is a stroke of brilliance. There is no shortage of laugh-out-loud moments within Gant's original adult comedy" ~ Lubbock Avalanche Journal