So You Want to be a Theatre Director? 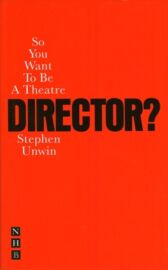 A hands-on, step-by-step guide to directing plays by one of Britain's leading theatre directors

As Unwin himself says:

"'Directing plays is difficult. The aim of this book is to lay out what skills are needed, and to give some sense of how you might develop them. The emphasis is on the professional theatre, but the book is useful for directors in other contexts - amateur dramatics, university drama, school plays and so on. Directing is directing, wherever you do it"

Starting at the very beginning, Unwin takes us step by step through:

'So You Want to be a Theatre Director? does exactly what it says on the cover. It is aimed primarily at the young would-be professional theatre director, though much of it will also be of interest to those working in the amateur sphere. The writing is clear and direct; the chapters are divided into conveniently headed sections ... His [Unwin's] book is filled with wise insights. Any budding director who reads it will learn much about the pitfalls and challenges he or she is likely to face but will also, I'm sure, catch some of Unwin's enthusiasm for what he describes as being, at times, 'the best job you can imagine'' ~ Around the Globe

FOR MORE TITLES FROM THE "So You Want to Be A ... " SERIES
click here